I have been seeing people talk about the Windows 7 Beta being available to download so I went to see how hard it was to sign up. It turns out that it actually pretty easy so I decided I would give it a try under VirtualBox just to see if it would work. The following is a list of steps I took.

To start with I'm using Fedora 10 as the host OS. I've had good luck with previous versions of Windows so I figured this wouldn't be a problem and it turns out it isn't. I am also using the 2.1.0 version of VirtualBox. I am not sure but it could be that the older versions won't work as well since doing the install requires using the Vista support in VirtualBox and that may not be as good in older version.

Now on to the steps you need to do the install:

After all was said and done it took up about 6.3 GB to install the base OS and that resulted in an external VDI image size of 5 GB. 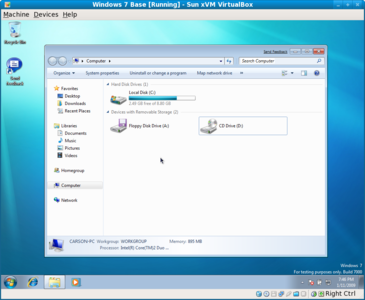 If I had more memory to allocate to the VM I would. It seems that Windows 7 has the same type of memory requirements as Vista and it is a little sluggish without more.